Five of the World’s Top Chefs

Paul is a French chef based in Lyon. Born in 1926, Paul was a student of the famous female chef Eugenie Brazier. He owns five restaurants in France, including the luxury restaurant l’Auberge du Pont de Collonges which was awarded 3 Michelin stars, one of the few restaurants in France to be awarded so highly. Paul is an advocate for the Nouvelle cuisine (new cuisine), this style of cooking places large emphasise on the presentation of the meal, and focusses on lighter meals than more traditional dining.

4. Micheal Bras – The chef who loves his vegetables

Next up is Micheal Bras, who is another French Chef to make the list. Born in 1946, Michael is famed for his creative approach to cooking, in particular his use of fresh herbs and edible flowers. Micheal has always celebrated nature through his recipes, emphasising the possibilities of cooking with vegetables, enabling a chef to get creative and bring multiple tastes to life. Now semi-retired, Micheal’s son Sebastian took over running the family restaurant in 2010 – Sebastian Bras is one to keep your eyes on over the coming few years!

3. Wolfgang Puck – The chef to the LA celebrities

Coming in at a respectable third is Wolfgang Puck, Wolfgang Puck is the first of our chef’s turned-celebrity. Born in Austria, Wolfgang moved to the States at the age of 24. His career kicked off after he became part owner of Ma Maison, a hot spot Restaurant for celebrities in Los Angeles. Wolfgang has over 35 restaurants around the world, and has featured on pretty much every culinary television show, Master Chef, Hells Kitchen and Top Chef, to name a few. Wolfgang over the years has learnt to combine the traditional french cuisine with the popular Californian menus, this amalgamation is largely the cause for his success over in the States.

A familiar name to any household, Marco Pierre White was the first ever celebrity Chef, becoming head chef on Hell’s Kitchen in 2007. Marco Pierre White, to this day, remains the youngest Chef ever to have received three Michelin stars, a pretty impressive achievement. His career has been largely surrounded by controversy in the media, including bust ups with other chefs, showing racism on his cooking show and a violent relationship which ended his second marriage. None the less, Marco Pierre White has an incredible talent for cooking. He is known to specialise in French, Italian and British cuisine but his official retirement in 1999 meant he is no longer found on the restaurant scene.

In first place, it has to be favourite British chef Gordon Ramsay. Ramsay came to cooking after injury meant he could no longer pursue his own football career. Ramsay specialises in French cuisine originally learning from the French chef Guy Savoy. In 1998 Ramsay opened his own restaurant in Chelsea, London, which went on to receive the acclaimed three Michelin stars. Since then Ramsay has built an empire of successful restaurants around the globe. In 2015 he was ranked 21st highest learning celebrity in the world, he also received an OBE in the 2006 honours list, making him, arguably the most successful Chef of our time.

Fancy yourself as a top chef? Come and join us at our Gascony Cookery School and learn the tricks and tips used by the most successful chefs.

Learn from the chefs who have worked in top restaurants themselves, in a setting where the famous French cuisine originated. The best bit is everything you learn you can take home to show off to friends, Gordon Ramsay watch out! 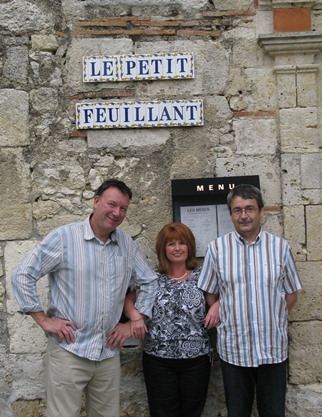