Home » News » Do you know your French Breads?

Do you know your French Breads?

Many of us are lucky enough to have visited France and enjoyed freshly baked bread or croissants still warm from the Boulangerie oven. This tradition is now fast becoming popular around the world as we find them available in cafes, restaurants and shops almost anywhere and at any time.

Croissants are most probably the most well-known and popular French breakfast pastry. This crescent shaped, light, flaky and sweet treat is made from dough layered with butter, using a technique called laminating where it is rolled and folded numerous times. The pain au chocolat, a rectangular variation, has a piece of dark chocolate in its centre. The Pain aux Raisin is similar but shaped in a spiral with raisins and a crème pâtissière filling. 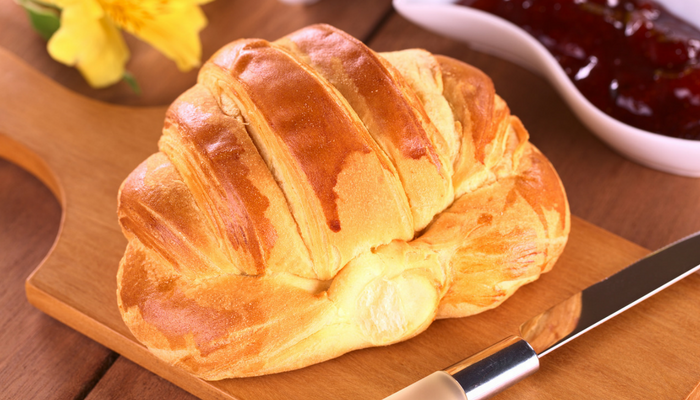 French food laws define bread as a product containing only water, flour, yeast and salt. The most well-known of all French breads is likely to be the baguette; a long thin loaf with a crispy crust and soft bread in the middle. There are another two variations of baguettes; firstly, the baguette farinée, a floured baguette which has a pale crust from where it has been dusted in flour before baking. The other is the baguette moulée or moulded baguette which is very often one that is produced in an industrial bread-oven and usually recognised by the fine lattice pattern on its underside.

Traditional French white bread has many variations in shape and size. The Flute is double the size of a standard baguette whereas the Batard is half the length. The Couronne is shaped like a ring and the Ficelle is a very long and thin loaf which must to be eaten within hours of baking to enjoy it at it best.

Of course, French bread also comes in other varieties. The wholemeal loaf Pain Complet, sourdough Pain au Levain or rye Pain de Seigle are all equally delicious. The addition of bacon or lardons, olives, cheese or nuts is also becoming more popular too.

Pain Brioché is a sweeter bread made with added eggs, butter and a little sugar. It is rich and tender often being used toasted served with foie gras, fattened goose or duck liver. It is also often the bread of choice for any recipe requiring bread stuffed with meats or pâté. The Gascony Cookery School has a fantastic recipe using Brioché as its key ingredient so here it is for you to try.

4 slices from a Brioché loaf (each cut approx 3cm thick)

Cut edges off to form squares.

Cut squares in half to make 8 fingers.

Beat eggs with the milk.

Coat the Brioché fingers with the egg and milk mixture and fry in the butter until golden brown on all four sides.

The Gascony Cookery School would love to share more recipes with you with the added bonus of giving you a real opportunity to get away from it all, whilst at the same time immersing yourself in the French culture and way of life.

Dave and Bernard’s years of experience mean you will learn the skills used by real chefs with the ability to apply them to your own kitchen at home. Join us on one of our courses, click here to learn more.