Home » News » The Gascony Cookery School: I can’t imagine residential cooking schools get better than this

The Gascony Cookery School: I can’t imagine residential cooking schools get better than this

I’ve done a lot of one-day cooking courses, and found something to love about each one. But this holiday had a new edge: a residential course. Four intensive days of cooking with a bit of gastronomic sightseeing, deep in the heart of one of France’s most famous regions for cuisine.  It was fabulous.   So great, in fact, I’m a bit worried about what will happen if we try another. No stories I’ve heard from people who’ve done cooking-centred holidays seem to be quite as fabulous as the experience we’ve just had.

The Gascony Cookery School combines the expert attention of two professional chefs with a stunning location and a delectable repertoire of dishes. Add a week of lovely weather, a pleasant combination of fellow students, and evenings of free-flowing local wines, and you start to imagine the magic. And, of course, we ate like princes on the gourmet fare we’d created earlier each day.

Given our experience, we’d signed up to the advanced course. The highlights for me started with plenty of work on butchery skills, including top tips on knife care, boning out a delicate quail, taking apart an entire duck (head and feet still on), tunnel boning that bird’s thighs and legs and boning out lamb noisettes. Stuffing was a revelation. After working with that quail we wrapped its boneless body around a ball of stuffing, creating what looked like a complete bird for roasting but would deliver effortless, boneless slices to the diner. (See the photo below.) Given what a pain quail usually is to eat, this is a blockbuster dish. We did another stuffing for the duck legs, and yet another for duck neck. On the latter, the duck skin essentially becomes a crispy crackling casing for a version of pork sausage.

Duck, in fact, was the most memorable meat of the course. Not a surprise here in the home of foie gras, where a whole industry devoted to the birds’ enlarged livers produces massive, unctuously-rich breasts, thighs and legs as a bi-product. We spent a morning producing foie gras ourselves, from traditional preserving to more modern, gourmet approaches. (This was a customised touch for us, since it’s a feature of the basic course we hadn’t attended.) We treated breasts for air-dried preservation, making a kind of duck prosciutto that’s common in Gascony but rarely seen outside of it. And is, as you’d imagine, delicious. 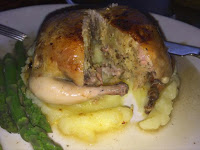 We made confit duck legs after rendering the fat from all the skin scraps and extra parts we trimmed off while breaking down the bird. When you’re paying £3 for a small jar of duck fat, the confit process (simmering meat in its own fat to preserve it) seems outrageously expensive. When you see how much fat comes off one of these ducks, you realise it’s the most simple, organic form of preservation imaginable. The more I cook, the more I find buying parts only rather than whole birds a huge waste. You can work miracles with the carcass, scraps and offcuts.

Pastry work came next on my appreciation list, giving me a new confidence with pate brisee (basic shortcrust pastry for pies and tarts) and a comfort with frangipane that will no doubt make it a regular on our dinner party menus. On another day, I came to a full understanding of exactly why my Christmas croquembouche was a disaster, and how I can do it again without worry. The course also de-mystified savoury mousses, my experience with a tasty prawn version encouraging me to explore the whole genre more.

I walked away with a sheaf of recipes, but they aren’t really the point of an experience like this. I probably had directions for most of this stuff in the cookbooks already in our kitchen. It’s the tips and techniques that ultimately differentiate a school like this, and I got plenty … from correcting my knife grip to getting more air into my pastry. So many, in fact, that I’ll devote the next entry to the top tips from the programme.

I have no doubt the quality of both instruction and recipes, plus overall enjoyment, was down to the trio running things. I suspect I got very lucky on my first try. I doubt many residential cooking programmes have teams as competent, dedicated and interesting as this.

English proprietors David and Vicky Chance moved to Gramont in 2002, and it’s easy to see what drew them. The village is a tiny rural idyll ideally suited to tourism, clinging to a lofty hilltop with views on clear days all the way to the distant Pyrenees. Fewer than 20 permanent residents live in the string of historic properties that radiate out from the Renaissance chateau at its heart, but holiday lets and cooking school classes can easily double that number. I worried that the locals might resent the incomers, but it was quite the opposite.

On the first night, we were invited to a barbecue at the pint-sized town hall, thrown open to allow one of the residents to show all his neighbours and friends his photos from his recent trip to the Grand Canyon. We didn’t stay for dinner (David was cooking for us), but that welcoming insight into country village life was charming and, I suspect, not unusual.

Gramont’s heart is comprised of a trio of buildings: the chateau, the Romanesque church facing it and a restaurant called Le Petit Feuillant between the two. The restaurant, which is also home to an extraordinary little museum on the history of local wine and Armagnac production, is a second anchor to the cooking school. The Chances renovated a group of old farm buildings in the shadow of the Chateau, little more than a 100-yard stroll from the Petit Feuillant. As they became close to the owner, Bernard Corbiere, they started to think those renovated rooms could become more than the standard gite or chambre d’hôte accommodation provided by most of the Brits who restore properties here. David also had a history in restaurants, and the Chances ran a catering company back in the UK. The rest is history. And, given the accolades the place is getting in the international press, a very impressive history too.

Cooking alternates between Bernard in his restaurant and David in his impressive farmhouse kitchen, where a large, marble-topped island can accommodate up to eight students at once. (We had six.) Vicky is an omnipresent “back of house”, keeping everything running and stepping to the fore on market day to lead tours of the local towns. The three make a formidable team, and the variety of interaction adds to both the education and the overall enjoyment. You will get more from Bernard, however, if you can follow some basic French as, unsurprisingly, he’s far more animated when he can swing into his native tongue. Had the nuns told me that I’d be using my French to understand the nuances of gourmet cuisine in later years, I might have studied harder. 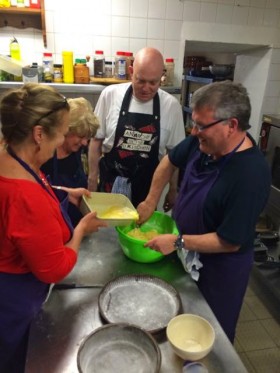 One of the points of any cooking school, of course, is that you get to taste what you make, and the dining alternates locations, too.   Most lunches and some dinners were in the picturesque Petit Feuillant, which is clearly a “destination restaurant” for many … tourist and local alike … who’ll drive some distance across this rural landscape for Bernard’s food. (He’s famous for his award-winning garlic soup, and does a mean cassoulet.) Happy hour started every night by about 6pm on David and Vicky’s loggia; essentially a roofed, outdoor dining room running the length of the main house with jaw-dropping views over the countryside. Al fresco dinners here, sometimes including other British expats who drop in to sample students’ efforts (and then reciprocate with a tour of their restored mill house later in the course) are a perfect way to end a day.

Not for the faint hearted

This is a serious agenda that works students hard. We were exhausted and much in need of those happy hour drinks. Every dinner included amazement at how much we produced in just one day, and most people turned in by 10 pm. I sense that many other residential culinary courses pad out the cooking with lots of sightseeing and breaks by a pool. Our agenda did feature two outings … one day to a local market, another dedicated to local wine and Armagnac … but neither made any concession to the prime objective of cooking. We were in the kitchen before and after the sightseeing. There’s even a bit of deadline pressure, as at least one meal is produced by the team restaurant-style, David organising you into an assembly line to produce elegant, fine-dining style plates at a rapid pace. Getting a large table served more or less at the same time, with food still piping hot and the presentation of each identical is an art. Thankfully, on other nights the team plated and served what we’d made, as we slumped in relief.

Both Bencards were keen to get up to our elbows in duck carcasses, of course. But there’s an option for partners who don’t want to cook (offered at a cheaper rate). They dine with the rest of the students and come on the outings, with free time while we’re cooking. We had one such husband on our course, and he turned out to be a brilliant addition. With no insight into the production, he gave us valuable commentary on the dishes. The course price is £1,230 per person, which includes all of the instruction, the outings, accommodation in beautifully restored rooms done up in French country style, all the food and free flowing wine and libations throughout.

For both the basic and advanced course, you usually arrive on a Sunday and depart Friday morning. It’s advertised as a six day course, but the first and last days are only dining and arrivals or departures; cooking school is just the four middle days. When I originally considered the course, four days seemed a bit short. With this level of immersion, however, it was plenty. Frankly, I’m not sure my brain could have taken in much more, and I certainly couldn’t have kept eating at that pace.

If there’s any drawback to cooking school in Gascony, it’s the richness of the cuisine. We were making and consuming dishes that most of us would consider to be special occasion food. For every lunch and dinner.

It is a glutton’s fantasy, but by day four you start to edge towards too much of a good thing. (Anyone who uses the words “too rich” more than twice a year may want to consider a different cuisine.) David, Vicky and Bernard wisely know when to pull the plug.

And, of course, by ending such a potent, concentrated experience just a bit sooner than you might want, the Gramont team wisely leaves you hungry for more. I have my greedy eyes on their charcuterie course. Or, better yet, if you can get six people together, David will customise a week just for you. Who’s in?