Top Restaurants in the World

It would appear, that French officials have found a way to establish which restaurants in the world are the best and this is compiled in La Liste which was first released in 2016. It’s run by the former French Foreign Minister and current Deputy Chairman of the French Tourism Promotion Board Philippe Faure along with a team of journalists, food critics, and publishers and sponsored by a few well known French brands.

According to its website ‘La Liste is an algorithm-based aggregator of food guides and reviews, crafting the perfect ranking of the world’s best restaurants’.

It has five stages within the process of ranking:

They use the reviews of more than 300 trusted sources such as Tripadvisor, the Michelin Guide and Google and this is put onto a huge database.

The score of each review is converted into a ‘standard grade’ which ranges from 0-100.

Opinions from many thousands of Chefs are obtained about local guidebooks. Then the results of this survey are given a ranking for trustworthiness which ranges from 0-10.

The average of all the review scores from the standardisation process are then balanced out by the source’s trustworthiness index.

The last stage involves the integration of customer reviews from online sources and this, according to the website, gives them ‘a 25% weighting in the final La Liste score’.

All the restaurants on the database are then ranked based on their La Liste Score. December 2016 saw the first glittering ceremony to honour the world’s best chefs. You will be interested to note that France has 26 restaurants in the top 100 closely followed by Japan with 23.

Top of La Liste for 2017 is Guy Savoy in Paris. With average prices for A la Carte around € 250 excluding drinks and a set menu ‘Colours, Textures and Flavours’ at € 395 excluding drinks, it has 6 different stunning dining rooms in which to dine.

Here at the Gascony Cookery School  we like to encourage all our students to find the ‘chef’ in themselves and enjoy creating new and exciting dishes. Our school offers students a hands on and comprehensive approach to the French way of cooking. It’s a real opportunity for students to get away from it all and immerse themselves in the French culture and way of life. 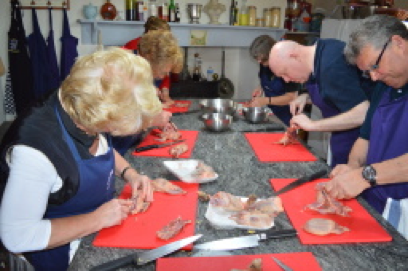 The Gascony Cookery School has a genuine and real insight into the world of French cuisine. All our courses have been carefully considered to ensure our students gain the most from them. Dave and Bernard’s years of experience mean you will learn the skills used by real chefs with the ability to apply them to your own kitchen at home. Join us on one of our courses, click here to learn more.